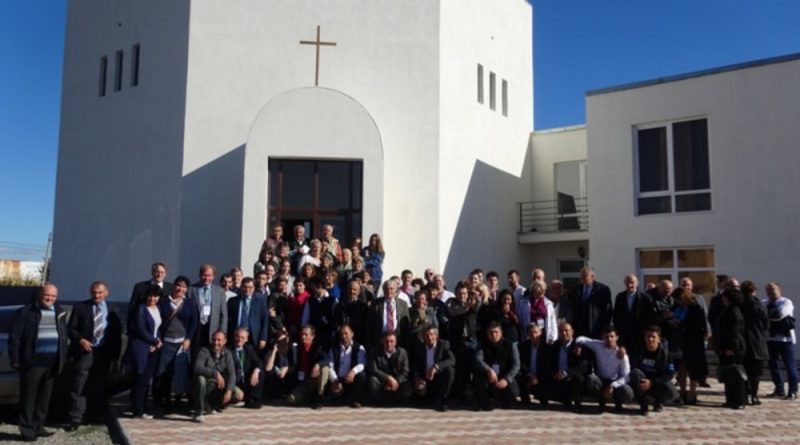 Baptists of Georgia celebrate the 150th anniversary of the movement

In mid-October, an international conference was held in Tbilisi to mark the 150th anniversary of the Union of Evangelical Christian Baptists of Georgia.

The event was attended by representatives of the Baptist Unions of Armenia, Ukraine, Belarus, the USA, Germany, Russia, and Georgia, the Christian  Mega portal invictory.com reports with reference to  GOD.NEWS and the press service of the RS ECB.

Minister of Religious Affairs of Georgia Zaza Vashakmadze addressed the event delegates with a welcoming speech. He noted that “Baptists have a special place in multi-confessional and multi-ethnic Georgia”.

In addition to general divine services, the conference also hosted three seminars on historical topics: “The Origin of Baptism in Europe”, “The Spread of Baptism in the World”, “The History of the Origin of the First Baptist Church in Georgia”.

Valeriy Antonyuk, Chairman of the All-Ukrainian Union of Baptists, inspired the audience to see the glorious nature of the Church of Jesus Christ. According to him, often believers do not see the special glory in which the Church is shrouded.

The delegation from Russia was headed by the Deputy Chairman of the RS ECB Sergey Sipko and the assistant to the Chairman for the Central Region Nikolay Maslyakov. Speaking at the conference, Sergei Sipko urged the participants to remember their election and vocation, to be faithful and diligent workers in the field of the Lord.

The head of the Baptist Union of Armenia, Asatur Hovhannisyan, pointed out the main distinguishing factor that forms the face of the Baptist church – loyalty to the Gospel.

At the end of the conference, the guests set off along the pilgrimage route associated with the emergence and development of the evangelical movement in Georgia.

Also these days, the solemn consecration of a new prayer house, built according to the project of Tamaz Kvirikashvili, took place. Senior ministers of the churches blessed the temple in different languages.

This year, the brotherhood of Evangelical Christians-Baptists of Russia also celebrates its 150th anniversary. The first Russian Baptist Nikita Voronin was baptized in Tbilisi in 1867.

Tbilisi is considered the birthplace of Russian Baptism. It was here in 1867 that the German Baptist M.K.Kalveit, who moved to the Caucasus in 1863, gave baptism according to the Baptist rite to Nikita Voronin. Voronin became the first Russian Baptist, and the day of his baptism is considered to be the date of the founding of the Russian-Ukrainian Baptist movement [5]. Soon, a Baptist community was formed in Tbilisi, which consisted mainly of Russian Molokans. The community was one of the prominent centers for the spread of Baptism in the south of the Russian Empire.

A.Z. Khutsishvili is considered the first Georgian baptized according to the Baptist rite; his baptism took place in 1912 in Tbilisi. Since 1919, services for Georgians have been held at the Tbilisi Baptist community [6]. Subsequently, the Armenian (1926) and Ossetian (1966) Baptist communities were formed in Tbilisi [7] [8]. In Soviet times, communities of “unregistered Baptists” also emerged on the territory of the region.