The Problem with Asking, ‘What’s Wrong with It?’ 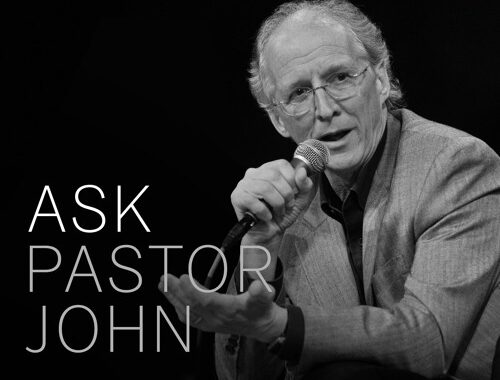 The Problem with Asking, ‘What’s Wrong with It?’

Every area of life calls for evaluation. Should we be doing one thing or something else? Career A or career B? Enough school or more school? Stop spending and start investing. Don’t settle for the good when you can go for the great. All sorts of books and workshops and apps stand ready to help us live from higher priorities. And this is important, especially for Christians. We live for the highest priority there is. We live for the eternal. Our everlasting priority bears on our media diets, our gaming, our careers, our parenting, and really every single decision of life. In the summer of 1997, Pastor John preached a sermon on Hebrews 11:39–12:2, a section of Scripture popularly referred to as God’s “Hall of Fame” or the “Hall of Faith,” a section celebrating our ancestors in the faith who learned to live faithfully in this life, turning away from the good in order to pursue the eternally great. Here’s a clip from that sermon sent to us from a listener named Melissa in Lumberton, New Jersey. Here’s Pastor John.

Life has begun to be trivial, lite — life lite, church lite. That’s who he’s writing to. Hebrews 5:12: “Though by this time you ought to be teachers, you need someone to teach you again the basic principles of the oracles of God. You need milk, not solid food.” Do you hear the ache in this writer’s voice? There’s been enough time since you got saved that you should be teaching a class or a small group or a wife or children or a neighbor. You should be teaching, and you need milk still — all these many years later. Why? You’re drifting, you’re coasting, you’re neglecting, you’re not vigilant. You’re treating life as though you can just get up in the morning and meander instead of run. That’s who he’s writing to.

Hebrews 12:12–13: “Lift your drooping hands and strengthen your weak knees, and make straight paths for your feet, so that what is lame may not be put out of joint but rather be healed.” In other words, there’s still time. There’s hope for this church. This is a metaphor of their spiritual condition. Their hands are kind of weak. They’re up to bat at home plate but have a weak stance. The knees are weak, just kind of wobbling around. And do you know what happens with weak knees? If they get hit from the side, it’s over — history. You need a big surgery, big brace, and no more basketball.

While there’s still time, do some exercises to get the cartilage and to get the muscles up to speed. This is all spiritual talk. He doesn’t give a rip about your knees, I don’t think. Well, a little bit; the Bible says he gives a little bit of a rip, but not much. He’d rather have your legs cut off and go to heaven than to keep your legs and go to hell.

“Don’t stroll, don’t meander, and don’t wander about aimlessly. Run as in a race with a finish line.”TweetShare on Facebook

Have you got the picture now of this church that he’s writing to in Hebrews 12? Let’s read verse 1 at the end again, because here’s the main point: “Let us also lay aside every weight, and sin which clings so closely, and let us run with endurance the race that is set before us.” Now, this command — “Let’s run, let’s run, let’s run!” — does not come out of the blue. It comes out of a passion for this church that’s in tremendous spiritual danger because of a false concept of life as meandering and coasting and drifting — no vigilance, no care, no watching, no earnestness, no weightiness.

And he says, “This is very dangerous. And so, please, let us look to Christ and let us run.”

So, the main point of this whole text that I read, from Hebrews 11:39–12:2, has one imperative. Even though in English there are several, in Greek there is one imperative, and it’s run — “Let us run.” Everything else in this text explains running or motivates running. The point is this: Don’t stroll, don’t meander, and don’t wander about aimlessly. Run as in a race with a finish line where everything hangs on the race.

Does This Help Me Run?

Now, what supports it? In verse 1, there are a couple of things said here as a means to running. It says, “Lay aside every encumbrance and sin which so easily entangles us.” I remember as a boy the effect a sermon had on me on this verse. And the only thing I remember was the distinction that the preacher made between weights and sins. And he looked out on us and he said, “Not just sins — don’t just lay aside sins to run this race. Lay aside every other weight that gets in your way.”

“Don’t just lay aside sins to run this race. Lay aside every other weight that gets in your way.”TweetShare on Facebook

And the preacher said to me as a boy, and I’m the preacher now saying that this text says, “Look to Jesus, and lay aside sins for sure — and lots of other stuff too.” Now, that’s a different way to live. Well, what question, as a 13-year-old, 14-year-old, should I ask if it’s not “Is it a sin?” And the answer is this: “Does it help me run?” That’s the answer. Does it get in my way when I’m trying to become more patient, more kind, more gentle, more loving, more holy, more pure, more self-controlled? Does it get in my way, or does it help me run? That’s the question to ask.

Set a Course for Holiness

If you have that mentality about your life, then you’ll ask not, “How many sins can I avoid?” but “How many weights can I lay down so that I am fleet-footed in the race of righteousness?”John Piper (@JohnPiper) is founder and teacher of desiringGod.org and chancellor of Bethlehem College & Seminary. For 33 years, he served as pastor of Bethlehem Baptist Church, Minneapolis, Minnesota. He is author of more than 50 books, including Desiring God: Meditations of a Christian Hedonist and most recently Providence.